Category: IN THE NEWS

The only thing as iconic as the Super Bowl game itself are the multi-million dollar commercials. And with everything from Gronk acting like a caveman to babies dressed as football legends, Super Bowl 51 did not disappoint when it came to entertainment. Here are our top 3 picks for most memorable commercials this year:

The Illuminati meet to discuss the lack of secrets they have left to hide from the public and fret over one in particular that appears to be on the brink of discovery: avocados contain healthy fats. The references to pop culture and hot topics (anyone catch the Deflategate comment?) add to the hilarity of this commercial. Avocados from Mexico, you are a secret no more.

Two weeks after the most recent Presidential Inauguration that gave way to numerous political conversations around the world, it was anything but a surprise to see some companies taking a political stance in their advertisements. Audi, however, did it with grace. As a young girl competes in a soapbox derby, her father thinks aloud about her future and subsequently, equal pay for women in the workplace. The commercial ends with a statement from Audi that vocalizes their commitment to equal pay for equal work. Cue the standing ovation.

It’s not always easy being environmentally friendly, and Kia wants you to know that they understand. In this commercial, Melissa McCarthy comically fails over and over in her efforts to save the planet, but through it all her Kia Niro with 43 mpg seems to be doing just that. In the end, the message is clear: for the environmentalists who want to be an “eco-warrior”, but can’t: Kia has got you covered. 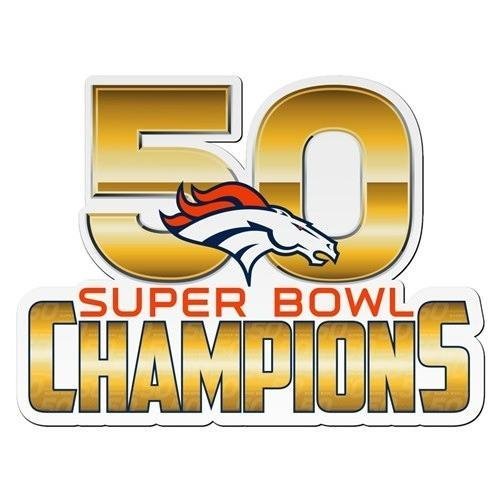 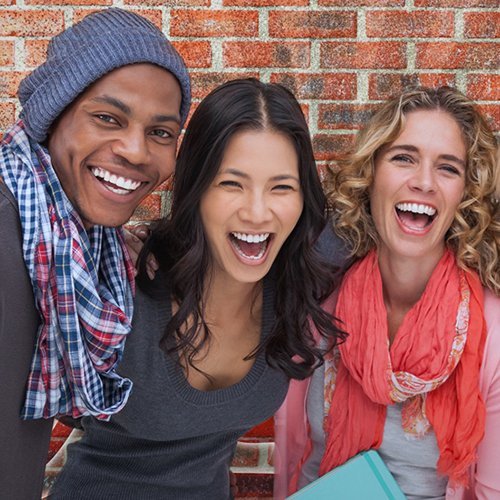 A lot of time, money and effort has been spent trying to target Millennials, but an emerging slightly younger generation of interest is called Generation Edge.  Gen Edge, also known as Gen Z, are the children of Gen Xers and are now approaching their 20s.  By some estimates they account for as much as 25% of the population, and they are more diverse from any other generation to date.  Ad Age recently released an article featuring three things marketers need to know to effectively market to Generation Edge based on a recent study.   The take aways from this unique generation are that that they appreciate the unique and imperfect. If you are a brand, you are better off embracing authenticity above all else, even if it doesn’t necessarily fit with the perceived Gen Z lifestyle.

“A new Yo Campaign or a Snapchat effort might not be the right thing for you. And even if it is, you don’t need to start saying “BRB” for no reason or “erryday” instead of “everyday.” An inauthentic voice will be very obvious to this demo and could quickly backfire rather than help in connecting with them. So if you’re an old brand, own it.”

In addition it appears the story behind a brand is more important than the luxury associated with a logo.

“A brand’s actions matter more than the brand itself. So a Gen Edger may be just as happy to display a $2,000 Maiyet bag as she would a $40 Everlane tote, knowing that both brands care about craftsmanship and are transparent about the production process.” 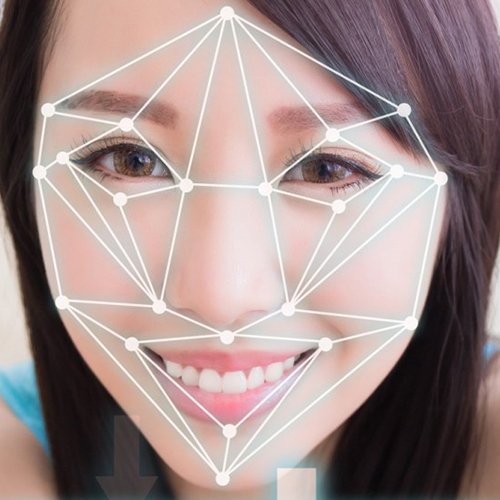 According to Affectiva, the future of ad testing is not focus groups or surveys. Big spending marketers are using state of the art facial coding software from Affectiva to analyze moment to moment facial expressions of people watching videos.  This technology allows advertisers to test ads for emotional impact on a large scale with more accurate data than traditional surveys.  To date, Affectiva has analyzed 2.8 million faces across 75 countries.  One of the unique opportunities this technology provides is the ability to see tune an ad for specific cultures and for targeted demographics.

To read the complete article from Ad Age go here. 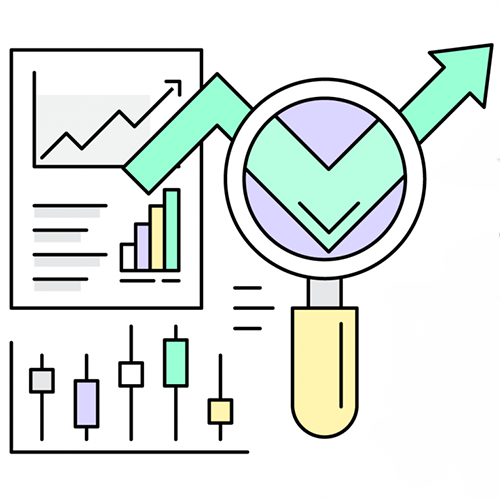 I’ve heard it from many small business owners.  “I’ve spent a lot of money on adwords, but it didn’t work for me.”  Search engine marketing is a pretty complicated undertaking with a lot of potential pitfalls, but when used correctly it can be the best advertising dollars you spend.  Even Adwords specialists can make mistakes, so if you are handling search engine marketing for your company on your own, take a look at this list of 10 common Adwords mistakes compiled by KISSMetrics.  The biggest takeaway, and one that we believe in whole heartedly, always be testing.  A static campaign is a dying campaign.  Think of your AdWord campaigns like babies: they can’t be left alone. But as long as you are consistently running experiments with your campaigns, you can be confident they will bring you success. For more information, check out the article.

If you’e interested in discussing your search engine marketing plans fill out the form to the right. 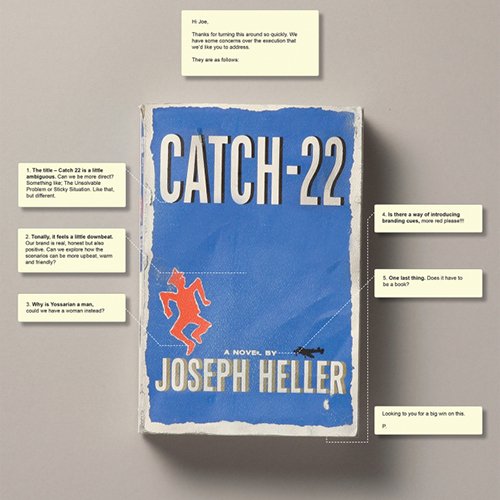 Some of the best writers started out in advertising including F. Scott Fitzgerald.  The Winston Fletcher Fiction Prize set out to remind us all to write for ourselves by featuring great novels with “client feedback.”  The results are hilarious.  Catch 22 (My personal favorite) is below, see the rest here. 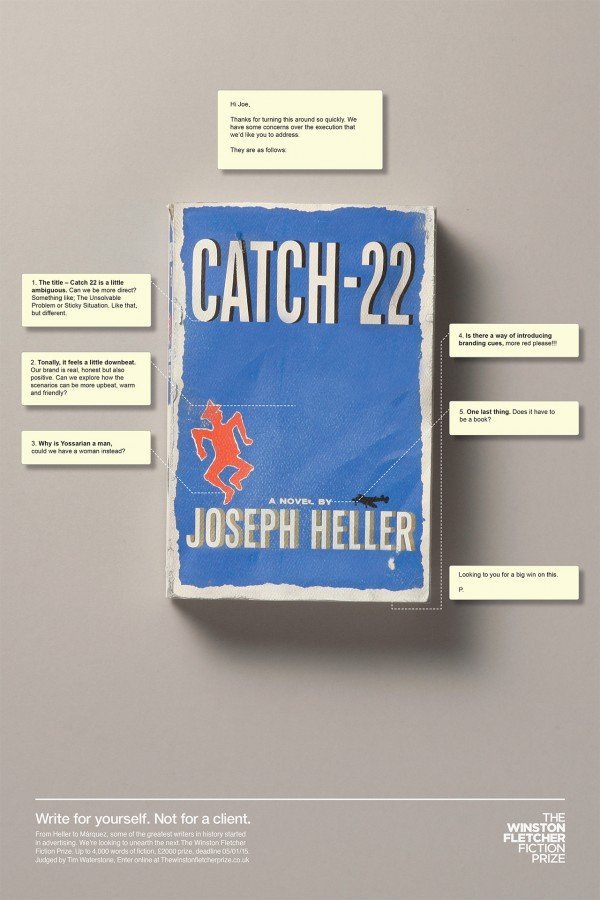 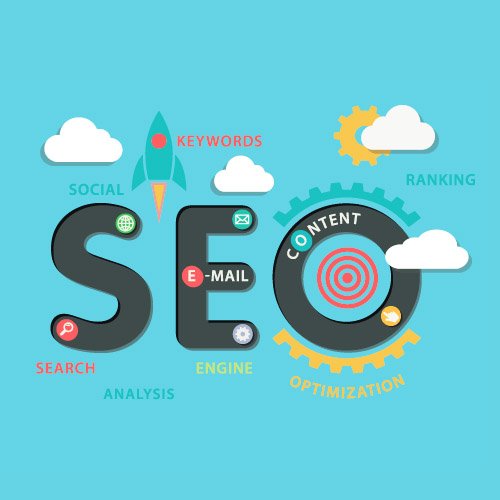 You’ve been doing the work.  Writing consistent blog posts that you feel will be relevant to your customer base, and sharing it as much as you can.  Is your job done?  Not likely. Many business owners embark on a content marketing plan without completing the crucial first step, creating a keyword list. If your blog posts are not optimized for the keywords that will bring your customers to your site,  you may end up  writing for an audience of one.  The Blogger Abroad, a tech blogger who writes articles helping others to start and maintain their online businesses, recently published an article that we found particularly helpful on how to build a blog keyword list. Despite the plug for various SEO Keyword Research Tools at the end of the article, there were still quite a few good takeaways in the article. Among the best advice:

If you’d like some help creating a content marketing strategy for your business, please fill out the form to the right.

Adobe Is The Big Winner On Oscar Night

This is how you celebrate the 25th anniversary of Photoshop.